My name’s Alex Rose and I’m a multi award winning indie dev and run a small studio in Manchester. I’m currently working on Super Rude Bear Resurrection for PS4, which is funded by Sony Strategic Content and Creative England.

I’m the lead designer, programmer, project manager & director of Alex Rose Games (aka Vorpal Games LTD) with a love of business/economics and a Physics degree.

This year I was one of Develop Magazine’s 30 Under 30, and I’m a Playstation Strategic Content developer and a Megabooth alumnus. 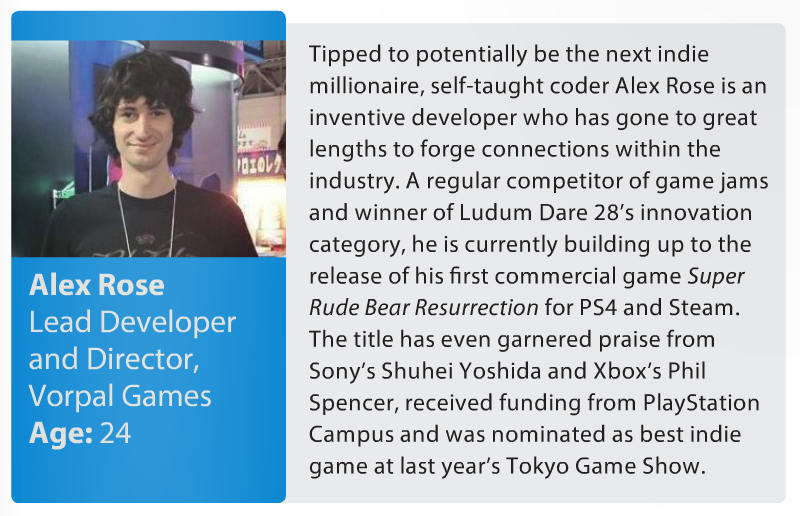 My company also got into the Telegraph & Creative England’s “50 most innovative businesses in the UK”.

I work with some incredibly talented people – my genius artists Kitt Dale and Simon Wong. My audio guys, Pierre-Jean Griscelli and Pierre-Jean Beaudoin, who worked on Batman Arkham City and Wakfu. And the incredible Deeco, a grime producer who works with the UK’s biggest grime artists and created SRBR’s soundtrack.

I’m a regular Ludum Dare entrant, and created the Rude Bear series with my housemate Antony Dewar. I program, design, compose/master music, a small amount of foley art and digital sfx, and do some vector art, tightening up images, particle effects etc.

In Ludum Dare I also work with some amazing people who you can find on the Rude Bear Wiki’s Developer page.

The game I’m currently work on came out of Ludum Dare 28, Rude Bear Resurrection, where I won first place for innovation, and then got funded after receiving praise from Phil Spencer (at Minecon) & Shuhei Yoshida (at Tokyo Game Show 2014/2015). I also won the EGX Rezzed Game Jam 2014.

I’m a regularly featured guest blogger on Gamasutra, where I’ve made the front page several times with my dev blog.

I used to do freelance game development in Manchester, and I previously wrote tutorials for GameDevTuts+. Around Manchester I’ve organised a Global Game Jam site, supported Gameopolis and Manchester Day, and advised/judged the UK’s largest professional game jam, Jamchester.

My games are very dynamics-based, I chose the Mechanics modules in Maths/Further Maths at A Level, and graduated in Physics (BSc Hons) from the University of Manchester in 2013. I learnt to code there when I took a semester of C programming in December 2011, and subsequently decided to go self teach C# and make games. I specialised in Dynamics, computational physics, and particle physics, did some W & Z Boson analysis in Root with DØ Tevatron data, PID controlling of embedded systems and did my dissertation in global navigation, mainly focusing on INS systems and GPS (Gen/Spec Relativity and Linear Feedback Shift Registers). And now I use my knowledge of fundamental physics to make video games where you routinely break Newton’s laws.

After a few months of on and off toying around, I started developing my first large game for iOS/Android, Rotation Station in mid 2012 in between uni, from an idea I had in 2007. I released it in 2013.

I’m a regular jammer. I don’t update this page much but I’ve done at least 10 Ludum Dares, 2 Global Game Jams (and run a jamsite), Flappy Jam, the Manchester game jam, two EGX Rezzed Creative Assembly Jams (one of which I won), and the Pewdiepie jam.

I started designing games when I was around 6-7, using ClickTeam’s The Games Factory to make basic platformers, shooters etc. so that got me used to the idea of conditionals, logical statements and basic game design in general. I carried on using this every now and then until I was 20.

I’ve played hundreds if not thousands of games, so I draw influence from all over the place, but I’ve always particularly been a big fan of Nintendo. It’s hard to say what games influenced my current games – because I never intend to make something that’s been done, it’s all influenced by everything I already played. Nowadays I tend to only play games I exhibit near because I’m super busy making games.

Pretty much everything I’ve learned about programming and graphic design I learnt as I went along, since I’d never done either of them properly until mid 2012.

As for music, I’ve been making VGM since 2009. I learnt to use FL Studio while making custom charts for Guitar Hero, and my love of production just evolved from there. I don’t have the patience to spend long times on the same composition though; I’ll spend 30 minutes to 2 hours on a track, and then never touch it again. My soundcloud has most of the songs from my jams on it. I don’t get to produce much anymore unfortunately, as I have the lovely talented Atmospherium, who makes most of the music for my jam games.

I have too many game ideas to be able to realistically make in one lifetime, but I’ll try to get the best ones made while I’m still breathing.

And my favourite games are JRPGs despite most of what I make.

You can contact me by email or you can grab me on twitter. I also very occasionally glance at Linkedin and Google+ and all that. 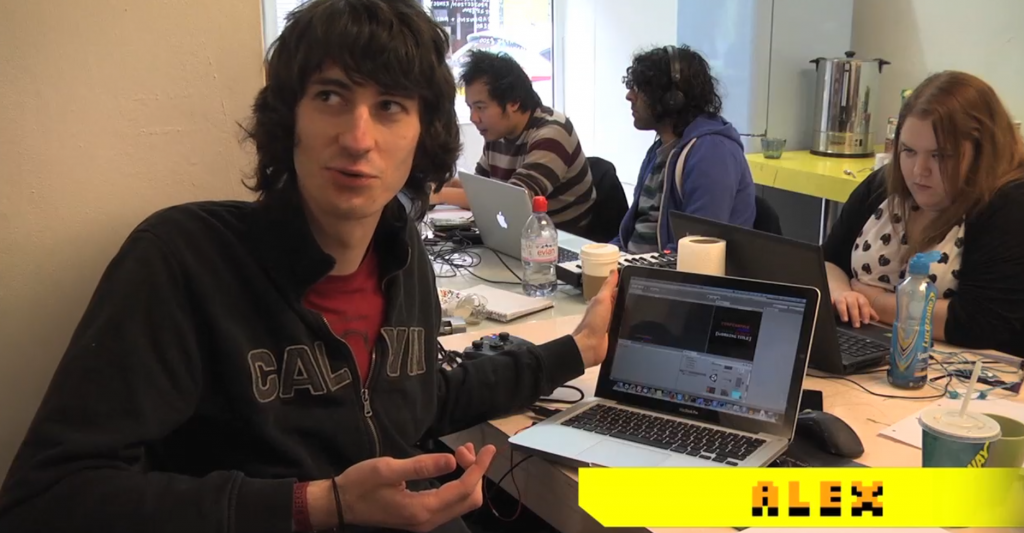